skip to main | skip to sidebar

I recently joined the biscornu exchange on the I Love Cross Stitch Group.  We had 6 weeks to finish our project.  I was ambitious because my family went on vacation to Las Vegas and left me home to watch the house.  I ended up stitching up a storm that week, lol.  Because not only did I do my biscornu exchange I also was in a bookmark swap on StitchMAP.

The bookmark swap had to be to our central person by August 15th.  This is the bookmark I sent:

A beautiful Hardange piece that I changed a bit.
I actually restitched this piece because the first one I did, I didn't like how it turned out.  I also didn't particularly like the size of the first finished bookmark.
Well I also was able to stitch up my biscornu exchange.  I sent it off at the same time as the bookmark and I know that it arrived safely to it's new home.  Here is a picture of the finished piece: 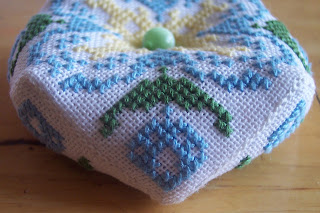 I'm sorry it's only a side view I can't seem to get the full on frontal view >.<.  If you don't know me, you should know I'm from Colorado.  I took some colors that I thought went well together and made my own stylistic view of a Columbine (state flowere of Colorado).  I made both sides identical.  The side view that is shown has the "bud" of the Coumbine.
I enjoyed stitching this design up and I might stitch it up for myself in different colors.  I'm glad it arrived safely and will be well looked after in the new home.
That's it for now I'll post when I receive my bookmark swap and my own biscornu.
Keep On Stitchin'....

I finally got my pieced washed, and when I took it out of the washer it looked like this but wet: 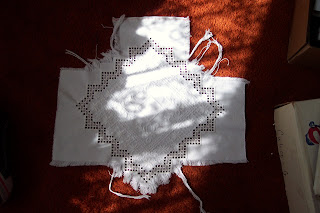 It was a good reminder as to why one should zig zag their piece first.  Needless to say I was shocked when I saw the condition after it was completely dry.  There were places that the shred was completely to the Buttonhole stitch itself.  It was also a good reminder to always wash your piece first before cutting it.  If, I hadn't washed it first before cutting it out, it would have been ruined in my opinion.  The cut area itself would have shrunk so far back and the shred to the Buttonhole, there would not be any salvaging.  Just to remind you I did this on a good quality Lugana and even then it still did shred.

However, I pulled myself together and carefully started cutting it out.  Surprisingly, the easiest places to cut was where it was shredded to the Buttonhole.  I was able to hold it differently than where it was attached.  I was so happy to completely cut it out without cutting any of the stitching.  The hard part was done.  Then it was a matter of ironing it and now here is the completed piece that was 13 years in the making: 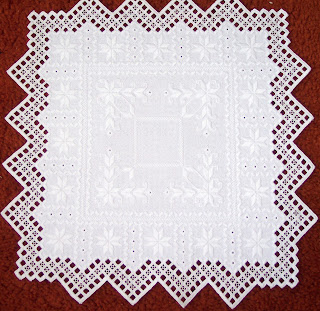 I'm so proud of myself.  I will definitely be doing another bigger piece in the future but I don't think I'll be doing it on Lugana, perhaps something else.  However, I will be following my rules of doing all the stitching first, then washing to clean and shrink the fabrick, and then doing the cutting.

Ready to be completely cut out....

So, I know it's been more than a month since my last post but in that time I was able to finish the weaving completely on my piece.  I am going to throw it into the washer before cutting it completely out.  This will insure that it stays intact, not that the first washing wouldn't and it will be easier to iron while it's still attached to the larger piece of cloth.  Without further ado here are the final pictures. 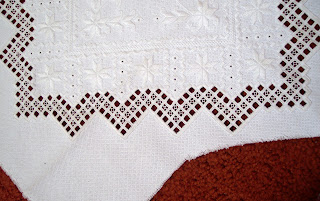 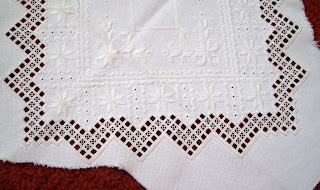 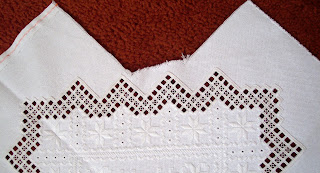 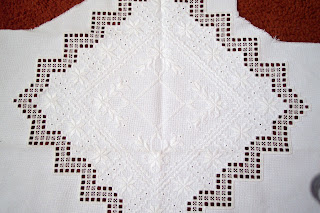 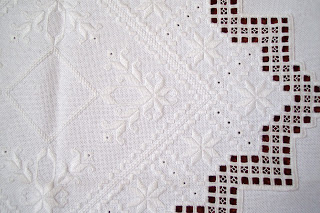 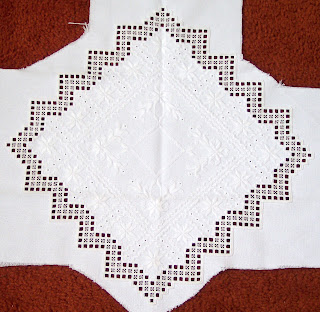 There are the pictures.  As you can see I did a close up of each side...well as close as I could get.  A close shot of the center with a partial loo﻿k at the four completed sides, one of the center satin work, a motif that I like and will be using again.  As well as an overall of the piece.  I'll post again when I've finally cut it out and wow, I can't believe it's finished lol.
Keep On Stitchin'...

Posted by Moon_Child at 1:00 PM No comments:

So, I've done a fair amount of weaving on my Hardanger piece. It's going fairly quickly because for the moment Mom and I are sharing my computer. She gets it during the day and I get it at night. Mom is of course jealous that I'm getting to stitch, I just shake my head and say "You can stitch just give up the computer." She just shakes her head at that suggestion, lol. But as promised here are progression pictures of the piece: 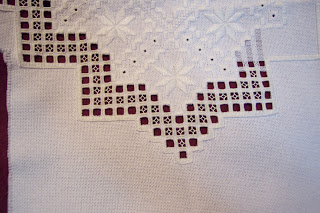 As you can see in the piece I've got some real good looking Dove's eyes and some what I consider not so good looking ones. I'm hoping to improve enough on this filling stitch to move onto a different stitch on future projects. Perhaps taking up the Maltese Cross or *shudders* perhaps the Picot. The world of possiblities are endless and I mean to explore ever single option for Hardanger filling stitches eventually.

Posted by Moon_Child at 8:25 PM No comments:

I'm hoping that this is the year that I finish my largest Hardanger piece to date.  What started out in 2000 stitching up, I finished stitching it in 2012.  It wasn't a matter of the size that stopped me, it was the fact that I lost the piece for 10 years.  I picked it up again in 2010 and finished the stitching relatively quickly.  What took longer was finding pieces to fit into the white spaces surronding the large doily.  I found them and finished them.  Then it was a short hop into the washer and dryer, then the scary part came around, cutting it all up.  I've blogged about the other pieces that were on the large piece of cloth in earlier posts.  This one is dedicated to the large piece in the center.

I started cutting out the weaving area late December 2012.  I got a little section of it done then set it aside until the new year.  Most of my weaving has been this year, and here is a picture of it: 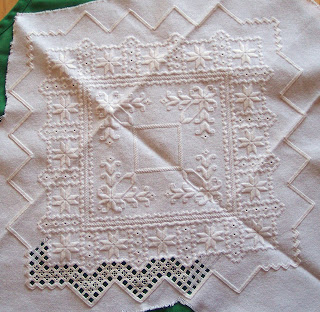 As you can see I've not cut out the entire area that will eventually be woven.  I'm doing it by little bits of cutting at a time.  The reason behind this is something I learned in EGA and I'm sure it's mentioned elsewhere.  If I were to cut out the entire weaving area, I would disturb the strength integrity of the cloth.  By cutting out little sections and weaving until I get to my cuts I leave intact the integrity.

I've added a Dove's Eye filling to this piece.  The pattern calls for no filling stitches in the weaving area.  I wanted to better my Dove's Eye stitch again.  So here is a picture of it up close and personal:

I had to come up with this pattern.  I prefer to do my Dove's Eyes in the middle if at all possible.  I personally don't like to stitch inbetween the Kloster blocks.
Here is a closer view of the area I'm stitching to next.  You can see that I have cut by the Kloster blocks towards the center of the design, however I've left the cloth fibers in until I get closer.  I will then remove them and cut the opposing side so that I will get my weaving grid:
﻿

I hope to keep my blog updated as I finish this large beautiful doily.  I will be happy when it is done but also sad at the same time because it's taken me so long to accomplish.  I hope I won't be putting a piece aside and losing track of it again in the future, but that is probably a hope that is in vain.
Keep on Stitchin'...

I finished my round Hardanger doily a few days ago.  So, I thought I'd post a picture of it here. 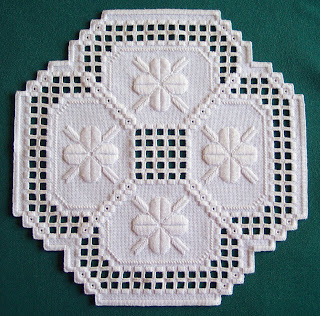 Here is the doily in all of it's glory. 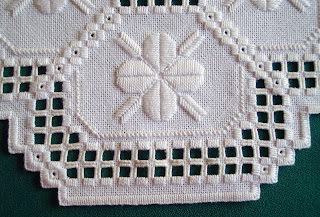 Here is a close up of one section of the doily.  I love the satin motif in here.  It's a flower and it's got wheat sheafs coming out from behind in a way.  It's all in how you look at it.
I also believe the overall piece follows the satin motif.
Keep on stitchin'...

After some time away for personal reasons, I have decided to post what I've been doing the past few months. It will be a picture heavy post. All of these pieces that follow I placed on the same fabric so that I could get as much use out of it as possible and not waste any. 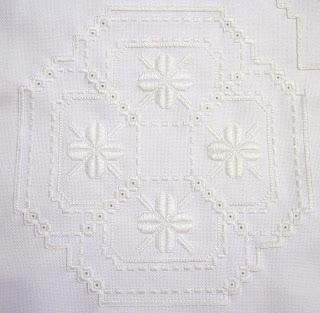 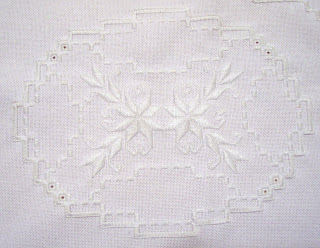 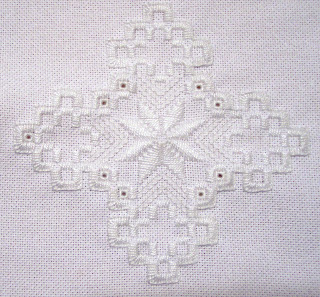 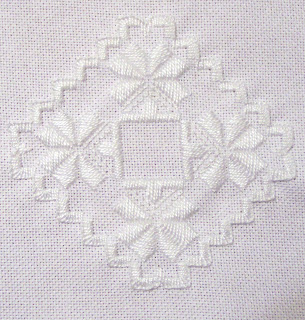 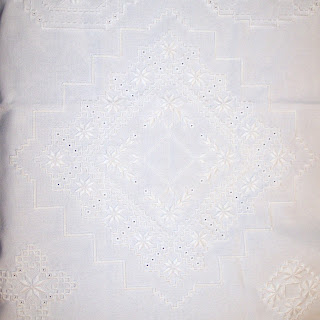 A diamond shaped doily and the biggest piece I've made to date.
The large doily is actually the piece I started stitching on about 10 years ago or so. So it's dead cener in the fabric. The reason it's taken me so long to get it completely stitched and ready to be cut out is that I lost the piece for roughly 7 years. Then it was a matter of finding pieces that would fit the blank areas in the fabric to fill it up. The first one to be chosen by myself and my mom was the oval doily, then the two ornaments and finally the round doily. After I was done with the stitching it was time to wash it so that the fabric would shrink a little and be safe to wash at a later date due to getting dirty. Plus, it was uber dirty from being handled for so long in stitching of the various pieces. After it was washed and dried I ironed the piece. Then it was time to decide which piece to cut out first. So, being that it's been a while since I'd actually done any cutting on a Hardanger piece I went with the option of doing the two ornaments first.

So that meant putting star beads onto the cross shaped ornament: 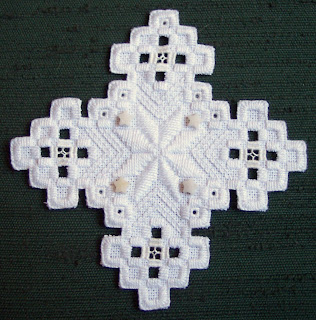 As you can see at the top point I put an eyelet so that a ribbon could be passed through for easy hanging.  I did that before completely cutting it out. 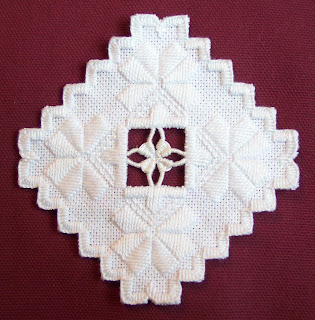 The diamond shaped ornament I a new filling to me.  It's woven and wrapped bars.  It's also known as a Maltese Cross.  I'm rather happy with the way it turned out and will be trying it again in the future.
Then it was onto the oval doily. 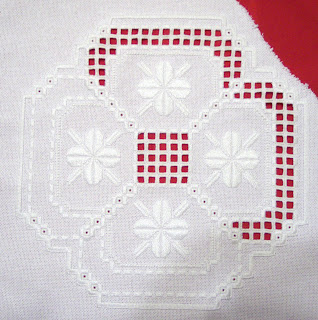 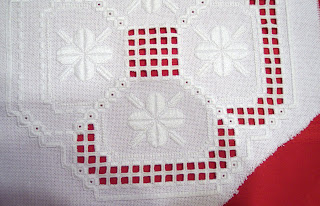 I still have to "leaves" to cut out and weave then it's onto completely cutting it out and I will post a picture at that time. Keep on stitchin'...

Posted by Moon_Child at 3:30 PM No comments:

Moon_Child
I am a free spirit that is just trying to have some fun. I like to do needlework. I love to do Hardanger and Cross Stitch. I belong to EGA and the local chapter. I enjoy my time there learning new things. I also raise and breed Beagles for pets and hunting purposes. I collect Heisey glass, moons, and beagles

Then click on this button to get free one on one mentoring.

Would You Like To Mentor Others In Your Favorite Needlework Techniques?

Click here to connect with apprentices who desire one on one mentoring.